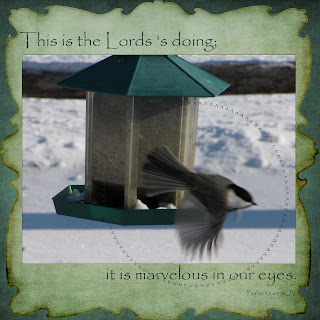 I wonder sometimes about our spiritual world, and how the angels and demons battle things out where we can not see, hear or feel them - and yet we can sense the battles that sometimes rage.  I was wondering about that tonight as I was watching my little hummingbird guarding what she considers 'her' feeder.  No one can feed there but her, and later on she'll allow her offspring to join her there. She chases all comes - males, orioles and wasps.  She won't back down, sitting and watching she chases and flies and then rests.
She is a real little tiny toughie.  But many birds are - they have to be.  Migrating long distances, surviving cats and other predators, seasons of rough weather and humans.  We do impact our bird friends in nasty ways with our buildings, wires, cars and pets.  We also bring them abundant feeders, overflowing flowerbeds and often admiring stares and keep the bird book pages turning.
All of this got me thinking of a while back - a Saturday morning.  Me hanging out in my bathrobe, Luke playing in the sunroom and Earl doing some homework (he was still in University then).  We looked outside in time to see the cat 'R' catch a chickadee.  Like some avenging angel I dashed out of the house, bare feet hammering on the rocks, bathrobe flying behind me.  I grabbed the cat by his head, plucked the chickadee free and with a flip of my wrist the cat was flying to the grass and me and the bird were on our way to the house.  A quick check revealed no injuries (it wasn't a catch to eat for 'R' but a catch to play) and just a very stressed out little bird. Some sugar water and warmth later we were enjoying some family time learning about birds. Luke was especially intrigued with the wings, tiny beak and that the bird would 'talk' back when he called 'chicka-dee-dee-dee'.  Soon, when the coast was clear of cats, we went outside and let the little bird fly free - most likely with no idea of what just happened except that it was still alive.
I think, sometimes, our lives are like that.  We have close calls both physically and spiritually where the power of God and His grace saves us for another task on another day.  We often, like the chickadee, don't know that Divine hands are grabbing the Devil's workers by their heads, prying us out of their grips and then gently caring for us until we are ready to fly again.  We don't know how often we are brushed by and covered with the protective wings of our Angels - but we should be thankful.   Thankful for angels, for divine hands guided by grace and for chickadees.
Luke 12:6 "Are not five sparrows sold for two pennies? Yet not one of them is forgotten by God."
Posted by Mystic_Mom at 5:56 PM