I was looking at our Jesus Barn (nativity) and thinking about all the characters of the Christmas story.  What did they do after that First Christmas?

We know what Mary and Joseph along with their Baby did - they avoided Herod and his murderous plans. But I often wonder about the shepherds, the Wisemen, the Innkeeper and those who turned that little family away?  Maybe we should peer back in time and see if God has a message for us there too? 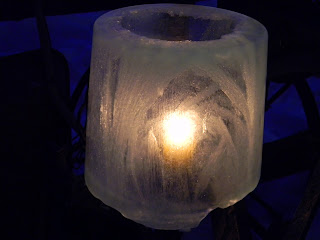 Shepherds - tired on night shift, on a chilly night.  The star was so bright and probably kept them wondering.  Perhaps dozing, almost nodding off when a great chorus of angels bursts through the night.  Can you imagine?

Hummdeummm...BANG! Holy trumpets, chorus and messages from Above!  No wonder they trembled they were most comfortable in their work  and suddenly things were never going to be the same again!  They would never be unaware of God's majesty ever again.  I wonder if they noticed the sheep were not afraid of the angel or if they were too awestruck?  I think they would always wonder why have us greet Him?  Not knowing, perhaps until many years later that they greeted the ultimate Shepherd and introduced Him to the first of His flock.

Did that change their lives?  Hard to imagine that it wouldn't.  But knowing farmers I think they went back to their flocks but never, ever forgot that night!  The stories would move around between flocks and keepers over the years they would grow and perhaps in those floods of people later on, He would minister to those who first greeted Him.


Wisemen - they sought for so long, and they travelled so far to see Him.  They knew He was coming, and brought the required royal gifts to His humble family.  They wisely chose to avoid Herod and returned home.  What happened along the way?  What did they say?  When they got home did they just say, "You had to be there, but the trip was worth it!"  Were they thought to have been mad to make that journey, did they return to find people thought they had died?  I wonder when they got back, gift bags empty but hearts full that they were humbled, thankful and stayed awestruck the rest of their days.


Innkeeper - was his choice one of greed (I can rent any space they'll fit in!) or was it of compassion (that poor girl is going to have that baby RIGHT here if she doesn't find a place soon) or was his choice on that was guided by the quiet whispers of the Angels?  Did he know that the stable needed to be made ready, even before he knew why?  Did God stir his heart to welcome them in their time of deep need?    Perhaps the light shining from the Christmas star gave him a sense of peace which was so absent during the business of a city full of people for the census.  Whatever his reasons, he provided what was needed and perhaps more.  Maybe he shared food, blankets, a fire and found a midwife for Mary.

I wonder, though, after all the excitement what he and his family thought of their humble guests?  Not many young families giving birth in a barn would have such visitors as they!  Richly clothed and bearing gifts the wisemen came - bet no one missed their arrival!  Shining brightly - no one missed that Christmas star! The presence of the shepherds, away from their hills and flocks at night - this never happens!


I think that the first Christmas was one full of gifts and joy as well as mystery and excitement for everyone around that humble stable.   Farm animals kept it warm, their bodies and breath, their straw and hay scenting it like summer fields.  The cool light of the star filled windows, doors and cracks with its unmistakable presence.  Visitors of both holy and royal stripe appeared as well as those humble and poor.  All came, because God chose this innkeeper's stable for His son to be born.  All came because of the star, the angels and because of love.


Christmas is about open hearts, open homes, open hands and when gifts are given they come from the heart.


Be well and be brightly blessed during this season and into the New Year!
Posted by Mystic_Mom at 1:44 PM