Have you read Numbers lately?  Most especially Numbers 21:6-9?  It is where the people complained and were visited by poisonous snakes.  It is where, instead of taking the snakes away, God provided Moses with the means to heal the bitten from the fatal poison.God wanted His wayward people to look to His provision for healing and to keep their eyes on His provision, His leader, His power.  Not on their complaints, their needs, their wants but rather on Him. 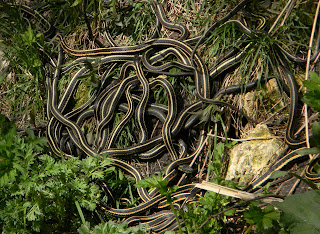 Would you like to come with me to John 3:14-15 and see how this story prepares us for the Cross?  Yes, for the cross, that bloody piece of wood to which death and sin are nailed and from which our Saviour rose victorious.  Jesus, like His Father, did not provide that which the people asked for but He did so much more!


No earthly, worldly kingdom for the Jews, rather eternal life for all who believe!

No great battles, won victoriously, rather thousands fed from a few loaves and fishes.

No paradise in the desert, but manna from heaven, quail from the seaside, water from rocks, healing from snakes.

No quick and sure answers to many pleading prayers, but small daily blessings.


No easy answers to the challenges faced but quiet assurance of His grace and His peace.


No flashes of great evangelical insight but the wisdom from a child, who believes with his whole being in his friend, his Saviour, his Lord.


God could have chosen anything for the people to look upon in the desert, but He chose a snake on a pole.  To remind them that He wasn't taking away the snakes but their poison.  Ultimately the cross also took away the original poison of sin and replaced it with shining white grace, heavenly acceptance and holy peace.

God could have chosen anything for the people to sacrifice His Lamb upon but He chose to the nail ridden, blood stained cross.  To remind them that He wasn't just here for today but for eternity. That the promises He makes stand forever.  The cross, that sign of horror, was just as abhorrent as a poisonous snake and yet each held the focus of the sinner upon the holy healing hand of God.

Snakes and crosses, thank you Lord for putting our eyes and hearts where they belong upon You!  When the snake bites us with pride and frustration.  When the cross seems far away in the busy of the day.  When just one more thing is the final straw.  When tears fall hot and fears rack deep and we just sink to our knees and cry out Lord! Lord!